Our tipster Jones Knows thinks he’s found a huge slice of value in Brentford’s chances of getting a result at home to Chelsea. Back this 4/1 shot.

How did we get on at the weekend?

A profit of 9.5 across the board from the bets advised, with Dominic Solanke taking just 62 seconds to deliver on his anytime goalscorer prospects at 3/1 (2pts win) for Bournemouth at Fulham. Not to be for the 22/1 on him scoring twice and 150/1 on him hitting a hat-trick but let’s not be greedy. Our 13/2 double also copped maximum return as Brentford and Brighton played out a game where both teams didn’t score and Chelsea won without conceding at Aston Villa. It really is a funny old game as that Chelsea victory without conceding was smothered in fortune as Kepa Arrizabalaga performed miracles to keep Villa at bay. Proof that sometimes bad bets win, and good bets lose.

It wasn’t all rainbows and lollipops, though, as Ruben Neves scored from the spot in a 1-0 Wolves win at Nottingham Forest. I had made the case for a Wolves penalty sooner rather than later two weeks ago and tipped Neves to score it and Wolves to win 1-0 at 80/1. See, good bets lose. 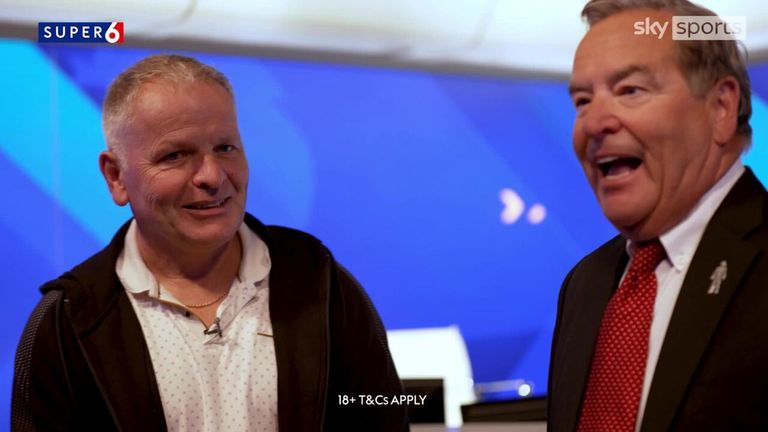 Chris Howell was just going about his everyday life on a Wednesday evening – that was, until Super 6 got involved and he landed the £250,000 jackpot

Chelsea were very suspect to direct balls down both channels as Aston Villa swung in 30 crosses and caused big issues. Brentford at home do like to get the ball forward quickly too, so this will be another test defensively for the Blues, who are playing their sixth game in 19 days and may just lack for intensity in the cut and thrust of a west London derby that means a lot to the Bees.

This can be seen in the two meetings last season where Brentford performed exceptionally, falling to an unlucky 1-0 defeat at home before rampaging to a 4-1 win at Stamford Bridge. The expected goals data from those two meetings also presented that Brentford had Chelsea’s number, winning that battle 3.21 vs 2.03 across the two fixtures. The 6/5 with Sky Bet for Brentford to win or draw is a price I want on my side.

Combining a pro-Brentford result with the total match shots also holds huge appeal at the prices. Since promotion to the Premier League, Brentford’s home games average 24.7 shots per match and I’d expect that number to be above average for a game involving an elite attack like Chelsea’s plus the intense derby atmosphere.

Brentford managed 34 shots on their own in their two fixtures with Chelsea last season, with the game at Stamford Bridge producing a whopping 38 shots. I’m happy to play the 27 or more shots, which looks a lovely play and I’m happy to combine that with the 6/5 on Brentford double chance with double stakes being advised.

1pt on Solly March to score for Brighton vs Nottingham Forest (7/1 with Sky Bet – Bet Here!)

Solly March’s shot prices may have been snipped by Sky Bet, so that angle has gone but his goalscorer price remains absolutely soaked in value. I may have said that before.

However, against one of the most welcoming defences in the Premier League, a player with attacking metrics of 2.17 in non-penalty expected goals – the 26th highest of any player in the league this season – should be backed to score when the anytime price is bulky enough. It is here with 7/1 about him scoring certainly backable. It’s now 55 shots since he last scored and no player has had more shots (20) or more shots on target (9) without scoring in the Premier League so far this season.

Please, Solly. We can then all get on with our lives.

In games of such tight nature, set-pieces will undoubtedly play a big part and Palace’s inability to defend their box from such situations remains a weakness. They may have only conceded two goals from set-pieces this season but their expected goals data suggests they have allowed almost five – that is the worst record (4.79) of any team in the Premier League this season. It’s been a common trend since Patrick Viera took charge, with only Leicester, Everton and Southampton shipping a higher expected goals against figure from set-pieces than Palace (19.3).

Timothy Castagne should have scored from his header from eight yards out at the weekend and continued the trend of defenders having very presentable chances to score against Palace. Thiago Silva, Sven Botman, Fabian Schar, Ben Mee, Mathias Jorgensen, John Stones, Ezri Konsa, Nat Phillips and Virgil van Dijk all have had at least one shot from a set-piece situation against Palace this season.

This leads me to the prices about Max Kilman for Wolves standing out as particularly bulky. He may have only scored once for Wolves, but he goes up for every set-piece and struck the post with an effort in the win over Nottingham Forest. He is 11/8 with Sky Bet to have at least one shot at goal and is 40/1 to score the first goal. Both are worth backing.

1pt on Kilman to have one or more shots, West Ham +2 handicap vs Liverpool & Brentford vs Chelsea to have 23 or more match shots (6/1 with Sky Bet – Bet Here!)

It would be rude not to combine my three best angles for the midweek card into a juicy treble.