What system did Manchester City play in possession against Liverpool? Did Liverpool stop Kevin De Bruyne at source, or were City one man short on the right flank? Gary Neville and Jamie Carragher traded opposing views on Super Sunday – but who was right?

Mohamed Salah’s sensational second-half goal divided the sides at Anfield, but there was division in the studio after the full-time whistle as Carragher praised Liverpool for stifling Kevin De Bruyne – but Neville disagreed and blamed City’s system. 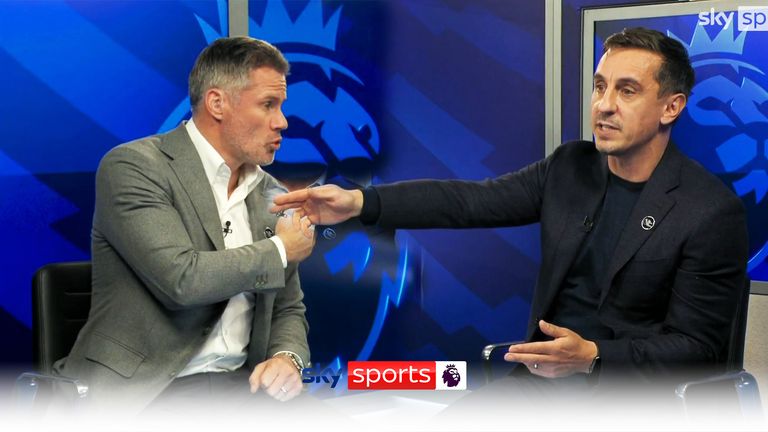 Guardiola elected to start with three centre-backs for the first time in the Premier League this season – with De Bruyne stationed alongside Ilkay Gundogan behind Erling Haaland.

“The two times De Bruyne got time on the ball, he found Haaland in the first half,” said Carragher. “Haaland doesn’t score and the other one was the disallowed goal – a brilliant pass.

“I think it’s because Liverpool stopped City from having space and time on the ball, because if you get it there, De Bruyne always delivers.”

The stats certainly back that up: Liverpool excelled across all key defensive metrics against the reigning champions and almost doubled their season average for tackles per game. In term of work-rate, Liverpool clocked 118.59 km – a distance only surpassed once by Klopp’s side over the past three league campaigns.

Liverpool were also noticeably deeper than usual. Both sides have traditionally led the way for playing high lines, but the Reds’ average passing sequence started at just 34m from their own goal.

Liverpool ran 118.6km against Man City – only Tottenham have run further in a Premier League game this season, clocking 119.4km against Leicester in September

To put that into context, that’s 14m deeper than Liverpool’s average against Crystal Palace in August. In fact, it’s the deepest they have played in the Premier League since facing City nearly three years ago in 2019.

However, Neville disagreed and suggested City’s system isolated De Bruyne: “I’m not sure about [Carragher’s point].

“Look, who are we to sit here and criticise Pep Guardiola? [But] the space for De Bruyne is always created when Cancelo [is slightly behind him and wide] and another player [is out wide, in front of Cancelo]. Then the ball goes [to the advanced wide player] and De Bruyne makes that run.

“De Bruyne had no player outside on that final line. Cancelo is playing like a right wing-back, which meant he was a pass short as well – so they had an option short on that side. City always have a triangle on each side, which means these [free the channel] for De Bruyne’s runs.

“City played with a back five in possession, they had three at the back, two [wide] and the boxes in midfield – where De Bruyne was the man inside – but he didn’t have the Liverpool full-back being pulled out.”

Carra disagrees with back five in possession

Carragher: They didn’t play with a back five with the ball, they didn’t!! They had a back three, Cancelo was right-wing, Foden out on left. A box midfield and three up front.

Neville: That wasn’t how it was. Who was on the right wing?

Neville: No chance! He was deeper than a right winger ordinarily would be, miles deeper. We’ll have to watch it back.

Carragher: What are you doing tomorrow?

Neville: I will watch it back!

Neville proceeded to clarify his point of view: “Cancelo would ordinarily be [slightly behind De Bruyne and wide] and Mahrez, or Foden, would be [out wide in front of Cancelo].

“They only had De Bruyne and Cancelo on that [right] side. Two players versus normally having three. That is indisputable, wherever you think Cancelo played. They had a man short on that side, which, I think, left De Bruyne slightly isolated in that channel.

“It meant (Andy) Robertson could play narrower, because the wide player got back in. I think it cost City, in terms of De Bruyne. Getting the space he ordinarily would.”

As the graphic below shows, City were certainly light on passing combinations down the right channel, with Cancelo and De Bruyne completely isolated as the only City players occupying that flank in the opposition half.

Indeed, it appeared to be a tactical ploy to target Liverpool’s right channel, where James Milner tussled with Phil Foden and came out on top.

In summary, the stats provide supporting evidence for both pundits’ opinions, with Liverpool excelling defensively, Cancelo playing slightly deeper than a regular right winger at City and De Bruyne being slightly isolated down a barren right flank.