For young players bidding to make the transition from academy to first team football, the pathway often requires them to head out on loan.

The parent club can then gain a clearer understanding of their potential in a competitive environment and make a more rounded judgement as to where their future lies.

It can be a daunting prospect – and understandably so. Agreeing to being farmed out to a lower league club, which could be miles from home, takes guts for someone in their late teens or early 20s. It is a real test of character.

The striker is now 26 and thriving in the Championship with Luton, but he started his career at Norwich at the age of 11 and spent the next 15 years on the Canaries’ books, with eight loan moves to six different clubs along the way. He travelled as far as Hamilton in Scotland, but also as reasonably close as Oxford and MK Dons.

Seven years of loan spells during his formative years became somewhat tedious, but the time also shaped him in the way a more streamlined journey might not have done.

“It’s not ideal being on the move all the time, but in terms of life lessons and learning the game of football, it was invaluable to me,” Morris says, in an exclusive interview with Sky Sports.

“Earlier in my career, I had the massive highs of reaching the play-off final with Shrewsbury off the back of a great season there and then did my ACL in the final and missed a year, so I don’t think you can get more of a juxtaposition than that. Once I overcame that, I realise that the highs and the lows are part of the journey.

“I never really felt part of a team [at Norwich] because I never really played there. I was just in and around the dressing room, out on loan and doing some rehab there.

“It made me grow as not just a footballer but an athlete as well, just being in different environments. I’ve grown to learn how to make myself be comfortable being uncomfortable, so there’s not many situations I could be put in now where I feel out of my comfort zone.”

Those highs and lows prepared him well for the contrast of what he was to experience when he eventually left Norwich for Barnsley last January.

When he headed north to Oakwell, the Tykes, then under Valerian Ismael, were in the throes of their unexpected push for the Championship play-offs. They got there, against all the odds, but narrowly lost out to Swansea before faltering altogether last season and they went down without so much as a whimper.

“The Championship is amazing,” Morris says. “Honestly, I think it’s the most unique league in the world. Every game is an absolute battle; if you’re even one or two per cent off it, you’ll get found out straight away.

“It [reaching the play-offs] was brilliant. We just found the right formula that worked for us, made ourselves really hard to beat and even when we didn’t perform too well, we had a knack for winning games – and that’s a huge trait to have in this division. Our intensity and energy levels were always at 110 per cent.

“I would say a lot of other people would have learned lessons [after relegation] for sure, but for me personally, I had already been through other things that had already led me to that point.

“You can’t get hung up on the low times and take things too personally, otherwise you end up stuck in a bit of a rut. The same thing goes for if you get too excited and too high when things are going well. It’s about finding the right balance and enjoying things equally. It’s about the journey.”

The performance of the team aside, Morris had found his level in the Championship and he was not about to drop down to League One again. That is when Luton swept in and secured his signature for a reported £2 million fee.

It took him a few weeks to warm up, but ahead of Tuesday’s meeting with his former club Norwich, the frontman has recorded eight goal involvements (six goals, two assists) in his last 10 games.

He was already more than comfortable playing in the second tier, but what has Hatters manager Nathan Jones done to extract the best from Morris?

“With the due diligence behind the scenes and the way the coaching staff prep you for each individual game, I describe it like a game of chess. Every move is different,” he adds.

“They will exploit weaknesses and encourage us to use advantages when we can and if we can. So much goes into it that it’s hard to explain. I think his [Jones’] personality, his passion and how hard he works is inspiring.

“That passion that everyone sees is contagious. I’ve always been a believer that a team reflects manager’s personality and characteristics and I think we show that, for the most part, when we’re at it. We’re gritty, we will never give up and we’re that relentless sort of team.

“I feel like I am going to create chances or score goals every game and that’s a place where I thrive. I’m thankful and blessed to be working with one of the best, in my opinion.”

Being part of a talented forward line helps, too. Luton have Morris, Elijah Adebayo, Cauley Woodrow, Cameron Jerome and Harry Cornick among their attacking riches. 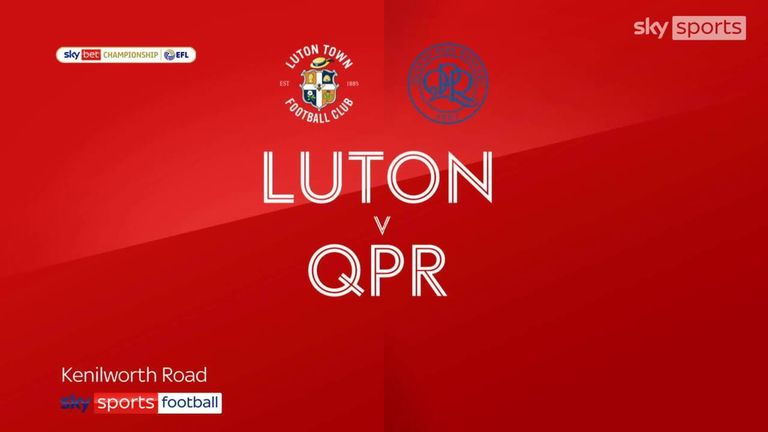 Highlights of the Sky Bet Championship game between Luton and QPR.

“It’s huge for all of us having the competition. We all push each other every day in training and try to outscore each other. It’s all friendly, healthy competition that is just going to make each individual better.

Before a game recently, Cameron texted me and said ‘Good luck tomorrow, pal. You and Eli work together, do this and do that,’ which shows how positive things are between us.”

With seven games left to play before the Championship pauses for the World Cup, Luton – who reached the play-offs themselves last term – are seventh in the table. They have kept five clean sheets in 14 games, are unbeaten in six and have so far lost just once on the road.

Morris is content with his side’s current situation going into a busy period.

“It’s lovely to be in good form and have the momentum, but it’s times like these that we’ve really got to put the hammer down and take advantage,” he says.

“Being in the middle of the pack is a great place to be in this situation. It’s a long season, at the end of the day. It’s a marathon not a sprint. You can’t dwell too long on results because there’s always another game coming right round the corner.

“I think we’ve got a really good squad of pros, just in terms of rest and recovery and the way we prepare for each game. No one is messing around, we’re making sure our bodies are in tip-top condition every game. We’re never going to get a freebie in the Championship, so we go into every game with maximum respect and when that game is finished, win lose or draw, we’re right back at it, recovering, analysing and doing our work on the next game.

“Here, we’ve got a much more experienced squad, which is big as well. Having experience at this level is huge, as well as the coaching staff and everyone behind the scenes. They all work their absolute socks off and you can tell that in the training ground environment every day. It’s another thing that’s integral to being successful at this level.

“That’s the same way all the way up until May. I’ll be more concerned about what the league table looks like at the end of the season.”